A few weeks ago I installed a very exciting yarn bomb commission for Hotel du Vin in Bristol. During July and August the city hosted 80 five foot tall Gromit sculptures (from Aardman’s Wallace and Gromit fame) as part of a giant arts trail. Locals and visitors alike were encouraged to find and admire as many Gromits as possible, by way of the free printed maps or using the dect-o-gromit phone app. Each Gromit was designed by a different artist and the variety was fantastic! We had Vincent Van Gromit, the Gromitosaurus, the Gromberry, and Isambark Kingdog Brunel to name but a few. Ultimately all the Gromit statutes will be auctioned off to raise money for the Bristol Children’s Hospital.

Early in June Hotel du Vin contacted me to say they would be hosting Katy Christianson’s Gromit and wondered if I might be able to help brighten up their courtyard to provide a cosy home for Gromit whilst he stayed in Bristol. They didn’t have to ask twice… I set about making pom-poms, bunting, stars, and dog-themed wraps to adorn the space with. And here are some of the results! 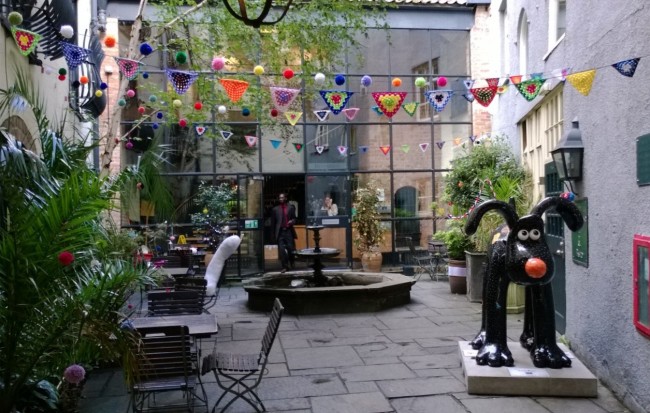 Canis Major Gromit in the courtyard 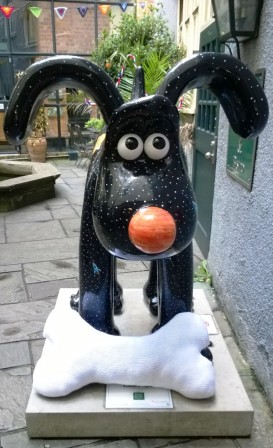 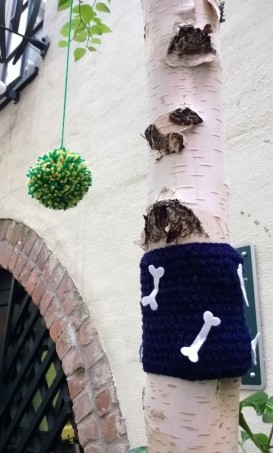 It was a really fun project to be involved in and the staff at the hotel were super friendly and excited about the prospect of hosting some yarn bombing for the summer. The knitted bone took forever to make, but I’m so happy with the results and very glad I persevered with it. Despite the flat being covered in woolly goodies I was really worried there wouldn’t be enough stuff to cover the courtyard, but I think the fears were unfounded. The courtyard looked suitably cosy without being over the top. I’ve also seen a few lovely blog posts by Gromit spotters who enjoyed the woolly additions which is great news.  My current project is another commission (remember the AXA one I did last year? They want more!) and that’s due to be installed in early October. Seems yarn bombing is still in fashion 😉