So maybe it’s just me, and maybe it’s something to do with the fact I’m in the midst of writing-up my thesis, but I keep seeing ‘craft’ everywhere. So much craft that I’m not even sure I know what craft is anymore, or what I even thought it was in the first place. In many respects this is a strange gripe to have with the world; I adore all things crafty, and it’s great that other people seem to share that interest too. Besides, one huge justification for choosing craft as the main focus for my thesis was its increasing ubiquity. But it’s the way in which craft is being taken up by advertising and corporations that I’m finding particularly interesting at the moment. I’ve got three examples that I’ve spotted this week to illustrate what I mean: 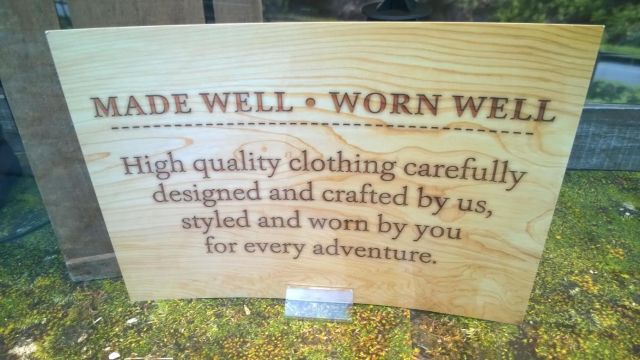 I walk past the window of Fat Face every morning on my way into uni, and this sign appeared in their most recent window display. Pyrographic techniques have been used to construct the wooden sign, which actually is quite a beautiful piece of work. It’s a crafty double-whammy – the sign itself being crafted, and the writing talking about crafting clothes. But why? ‘Craft’ has become something of a charged word in recent years, seemingly to imply a careful and considered process which is conducted slowly and respectfully. For many people it also still stands for the notion of ownership over an entire process – from designing, through to making, and eventually selling. But Fat Face don’t do any of these things. The designers design, the garment workers sew the clothing, and retail outlets sell the items. Furthermore, I very much doubt that any of these processes (especially the middle one) are conducted slowly and respectfully. It seems more likely that there will be targets to meet and standards to maintain. For although they rank as one of the more ethical high street brands, Fat Face’s CSR policy is somewhat vague. There’s no mention of living wages, or the environmental impacts of production, and the cotton currently in use is not sourced organically. In fairness, Fat Face have signed the ethical trading initiative (ETI). This has to be taken with a pinch of salt, however, for although it’s a step in the right direction it is far from a guarantee of truly ethical practices – indeed companies such as Primark and GAP have signed it too.

To me the sign is also trying to get across the notion of a Heideggerian ‘authentic’ life, one in which the wearer of these garments can go out and experience the world in its raw reality. They’re not clothes made for lounging around the house in whilst watching television, but clothes made for going on ‘adventures’ and generating a more authentic relationship with the natural world in. 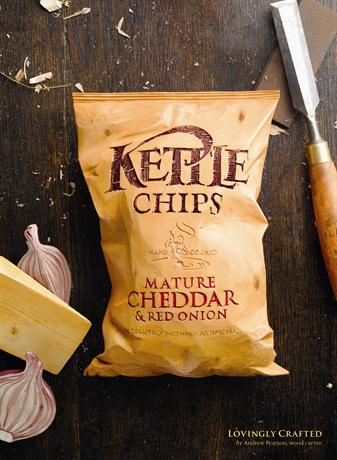 Apparently they’re ‘lovingly crafted’. I first saw this advert, with a crisp packet having been carved from wood, in a magazine. A little online research reveals that there are three designs in total – one ceramic and one glass. I must admit, it made me think. Can crisps really be crafted? Apparently all of their crisps are hand-cooked, so perhaps that’s why they felt the word necessary – as a sort of nod towards William Morris’ distrust of mass-production. Still, I’m not convince ‘crafted’ is the right word here. Nice advert though, and a beautiful carving.

Slightly different take here with the company not using ‘crafted’ in their product description, but featuring some pretty snazzy knitted hats instead. Spotted when reading the metro one morning. To be honest, pretty much anything with knitting catches my eye, and these hats were no exception. There’s also a shark and a bear in the series. I want the shark one.  Unlike the other two ads I don’t think this campaign is claiming too much with its use of craft. The fact they’ve used knitted hats does give a nod to the wearability and fashionability of wool at the moment, but it doesn’t strike me as having the undertones of authenticity, slowness, or care that the other two adverts seem to. But it is an example of craft literally following me everywhere. I’m sure there will be more examples to follow soon!